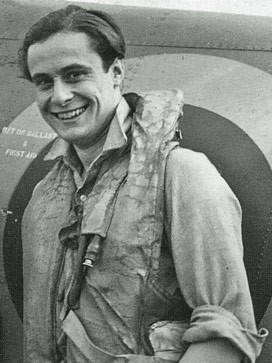 Geoffrey Harris Augustus Wellum was born 4th Aug 1921 in Walthamstow, Essex and became one of the youngest known Spitfire pilots aged just 18 during the Battle of Britain – earning him the nickname ‘Boy’.

Joining 92 Squadron in May 1940, Geoffrey flew during the Battle of Britain under the likes of Roger Bushell & Brian Kingcombe – predominantly from Biggin Hill in Kent. He had great success during the Battle, first claiming a Heinkel He 111 on 11th September 1940 – before claiming another 3 victories and many others ‘shared’.

On 5th Aug 1941 he was awarded the DFC in recognition of his achievements with 92 Squadron and he became Flight Commander of 65 Squadron at Debden in 1942.

Now a Squadron Leader – Geoffrey led eight Spitfires from the carrier HMS Furious on the 11th August 1942 to help reinforce the fighter situation at Luqa airfield, Malta as part of ‘Operation Pedestal’. By 1943 however, Geoffrey had completely burnt out from the relentless and intense stresses of service and he returned to Britain – eventually becoming a test pilot for Hawker. He retired from the RAF in 1961.

Geoffrey’s autobiography ‘First Light’ – first published in 2002 from his manuscripts of his wartime accounts became a huge success, and personally for me is one of the best (if not ‘THE’ best) fighter pilot accounts of the Battle of Britain. The book was eventually turned into a BBC documentary for the 70th Anniversary of the Battle – starring Sam Heughan.

Geoffrey resided in the tranquil and picturesque Lizard peninsula, Cornwall. His pure, raw emotion when speaking of his recollections and accounts, along his infectious and warming personality made him such a hugely focal and popular figure for both the general public, and the media with anything to do with the Battle of Britain.

I have been truly blessed to get to spend treasured time with Geoff on many occasions over the last couple of years. I made multiple trips to visit him in Mullion along with seeing him at many formal RAF events.

‘First Light’ was the first book I ever read, and has been a huge influence – so it has personally been a massive honour and dream come true to have met and spent time with Geoffrey on various occasions. Many treasured memories from sharing a pint in his local, talking about my own Spitfire flight from Biggin in 2015, along with introducing my children to him are moments I will cherish very dearly.

Tragically Geoff passed away on the 18th July 2018 – just a couple of weeks short of his 97th Birthday. A deeply upsetting loss of a great great man and I was honoured to be invited to attend his funeral in Mullion, where the whole village came to a complete stand-still.

In particular getting Geoff to see and sign my canvas which he inspired – titled ‘Cockpits Full Of Ghosts’, his incredible reaction to it – and to know he had a copy hung in his bedroom is something I will treasure and always be enormously proud of.