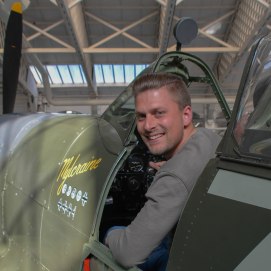 My name is Jonny Cracknell and I have been an aviation enthusiast most of my life with a particular interest in the Battle of Britain.

For me there is no more spectacular sight and sound than that of a Merlin engine roaring through the sky.

I also have a love of photography – trying to capture that perfect, timeless moment and creating unforgettable memories. Being able to combine my two passions is hugely rewarding and I hope that you will enjoy my site.

I have been enormously proud and privileged to have been able to meet and shake hands with many surviving veterans from both the Battle of Britain and WW2. I have had the incredible honour of getting to know and become good friends with some of my own personal heroes. In particular the late, great Wing Commander Tom Neil – who not only endorsed some of my aviation images, but who I assisted with in getting his final two books published in late 2017. He is dearly missed.
Most recently I have been providing the inspirational Flt. Lt Archie McInnes with many long overdue opportunites and gaining him the national recognition he richly deserves. This culminated in me writing and having his story published in his book ‘Against Adversity’ (2019). I have also had many aviation images used in various publications, the National Press and aviation magazines.

I hope that in capturing and sharing my images of these incredible aircraft and remembering these heroes it will continue to tell the stories of the brave pilots and the aircraft themselves so that they are forever remembered.

My Grandfather was hugely influential in my affection for the Battle of Britain and in particular the Spitfire & Hurricane. Whilst he served with the RAF during the war, he was not involved directly in conflict – predominantly based in South Africa.

Post war (1947/48) he served with the No.5 Flight Training School Technical Wing at RAF Thornhill servicing Tiger Moths, Harvard’s and Anson’s and told stories of even working on Spitfires. Growing up he used to regularly put on the now epic 1969 ‘Battle of Britain’ film which we would watch together, and it had me hooked from the first time I saw it.

My wife’s Grandfather was also RAF aircrew – as a Lancaster rear gunner with 44 & 207 Squadrons based at Dunholme Lodge & then Spilsby. Aged 21 he was one of the fortunate members of Bomber Command having survived flying circa 40 missions between 1944-45 (the average Bomber crew was expected to survive 8-12!).

This included sorties over Caen shortly after D-Day, targeting V1 factories at Saint-Leu-d’Esserent & various bombing missions over Munich, Stuttgart & Bremen. He also claimed a FW-190 shot down on 19th June 1944.

This era always makes me feel closer to my grandfather and his generation having never been old or wise enough to discuss his experiences before he passed away in March 2004.

I do hope that you enjoy browsing the site and  would greatly welcome any feedback or comments.