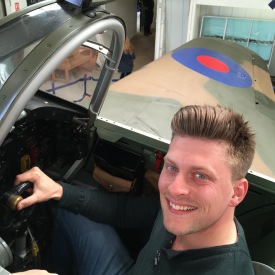 A quite unbelievable moment and a personal dream come true to sit in the only airworthy Hawker Hurricane which flew and fought in the Battle of Britain.

R4118 is probably the most historical aircraft still flying today, steeped in history having flown 49 sorties during the Battle of Britain – shooting down two aircraft and sharing another three.

Flown by greats such as ‘Bunny’ Currant & Bob Foster it was a truly humbling and emotional experience sitting in the same cockpit with the canopy closed, and taking hold of the same, original control column.

Enormous thanks go to R4118 owner James Brown for his invite and generous hospitality at Old Warden Aerodrome. A quite lovely gentleman who we owe a huge amount of gratitude for both purchasing and maintaining R4118, along with making sure she stays where she belongs – here in the UK.

When speaking to James it was immediately clear to see just how passionate he is about keeping her airworthy for us all to enjoy and to remember our history – a true enthusiast. I wish him all the best in his quest to fly her in a couple of years time.

James greeted us on arrival and took us around the aircraft in detail – quite incredible to think she is still 70% original! James then sat me in the cockpit and talked me through all of the instruments, some of the history and mechanics. He then shut the lid and hopped off the wing, leaving me to have a moment to myself.

Left to your own thoughts of what it must have been like for the young pilots in those surroundings, some of the greats who have been in that seat, how you can get out in 3 seconds before you are barbecued – all sorts goes through the mind! All very moving and only enhances the respect for the young ‘few’ if at all possible!  The irreplaceable smell of oil and the Merlin engine is something I wish they would bottle to take away.

The story of R4118 and her recovery from India is quite a remarkable one, and I would encourage anyone to purchase Peter Vacher’s (R4118’s previous owner and the man responsible for bringing her home and making her airworthy) book titled – ‘Hurricane – R4118‘.

A day I’ll never forget and am truly grateful to have the opportunity.

Hawker Hurricane Mk.I R4118 was delivered to 605 Squadron at Drem, near Edinburgh on the 17th August 1940. The squadron left Drem for Croydon in early September to join 11 Group at the height of the Battle of Britain.

She was first flown by Pilot Officer Christopher Frederick ‘Bunny’ Currant who made the flight from Drem to Croydon.

In less than 2 months R4118 had flown 49 sorties by 11 different pilots, and been responsible or partly responsible for the downing on 5 enemy aircraft. 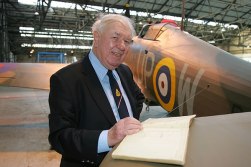 Following battle damage on the 22nd October, Pilot Officer Derek Forde limped R4118 back to Croydon but she was determined a Cat II on site (beyond repair). She was however returned to operational condition by Austin’s Civilian Repair Organisation at Longbridge & joined 111 Squadron in January 1941 at Montrose. 111 Squadron were primarily resting up after involvement in the Battle of Britain – so R4118 was predominantly used for flight and combat training purposes.

Following a few more incidents & repairs, R4118’s fascinating adventure to India and subsequent recovery some years later commenced. For more of this I strongly suggest you purchase and read Peter Vacher’s wonderful book ‘Hurricane – R4118‘ for the full story.

A huge thanks is also owed to Peter for his tenacity, dedication and determination in bringing R4118 home despite some major obstacles over a frustrating 6 year period, and who restored her to the beautiful aircraft we see today.